LOS ANGELES--(BUSINESS WIRE)--Maverick, a next generation social network, today unveiled its digital platform which provides new opportunities for girls and young women to exercise and share their creative powers and connect with the next generation of leaders, innovators, artists, and entrepreneurs. Maverick believes the next wave of social networks should be more than just an online connection -- it should be a community with a purpose.

Founded by digital media entrepreneur Brooke Chaffin and renowned academic and influencer Catherine Connors, who met as executives at Disney, Maverick is accessed via a free iOS app and web product and aimed initially at Gen Z girls and young women. Once inside the video and photo driven experience, girls have the opportunity to engage in creative action in response to challenges set forth by inspiring role models, known as Catalysts. Digital challenges offered include making their own superhero, creating their own dance piece and designing their own mantra.

Maverick Studio is a GPU-accelerated desktop app where our proprietary simulator of the physics of light is harnessed with intuitive and interactive drag-and-drop tools. Import your 3D models or CAD data files, and render amazing photo-real shots or turntable presentations with the best quality and the least effort imaginable. The distribution is available for download as a single Live CD ISO image, engineered for the 32-bit hardware platform, but also compatible with 64-bit netbooks. As netbook computers don't have a CD-ROM device, users are urged to write the ISO image to USB flash drives of 1GB or higher capacity. 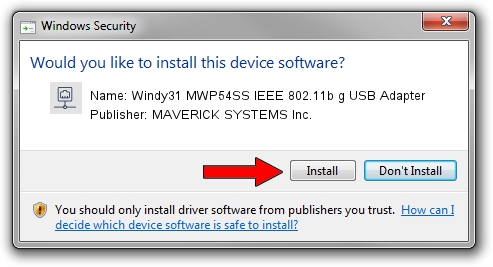 “The research on girls’ social development has shown us the same thing for decades,” said Connors, co-founder and Chief Content Officer. “During early adolescence, the majority of girls stop raising their hands, participating in sports and extra-curricular activities, taking risks, and stepping into leadership roles. In short, they stop believing in themselves. And it’s not because we don’t tell them that they should believe in themselves — it’s that they don’t get enough real opportunity to prove to themselves that they can.”

Mavericks and role models will also connect live through real world experiences. MaverickLIVE will be a series of one-day events across the country that shine a light on young Mavericks that are emerging on the digital platform in categories like STEAM, entrepreneurship, comedy and music. The first MaverickLIVE event will take place on April 28th in Los Angeles and will feature peer role models known as “Founding Mavericks” - including rising musical stars Chloe & Halle Bailey, YouTube phenoms Brooklyn & Bailey McKnight, Native American activist and model Daunnette Reyome, Olympic gold medalist Laurie Hernandez, and teen stand-up comedian and author Ruby Karp.

Maverick has raised $2.7 in seed funding from giants in the investment, media and social media worlds. Led by Matt Robinson of Heroic Ventures with added investment from investors including Susan Lyne and Nisha Dua of BBG Ventures and Jeff Weiner, CEO of LinkedIn. Maverick looks at these strategic investors as being instrumental in helping grow the business.

“Creating inspiring and constructive communities in the digital and physical world is critical for this next generation,” said Jeff Weiner. “Now is the right time for a network like this, architected towards a set of positive and collaborative interactions, that while purpose driven, is designed to be a sustainable business.”

Maverick, the next generation social network, is based in Los Angeles and offers a digital platform available on iOS and the web and will be rolling out MaverickLive events throughout the country. Founded by Brooke Chaffin and Catherine Connors, Maverick is funded by investors including Heroic Ventures, BBG Ventures and Jeff Weiner. For more information, go to www.genmaverick.com or download at https://itunes.apple.com/us/app/maverick-do-your-thing/id1301478918 and follow on Instagram at https://www.instagram.com/genmaverick/