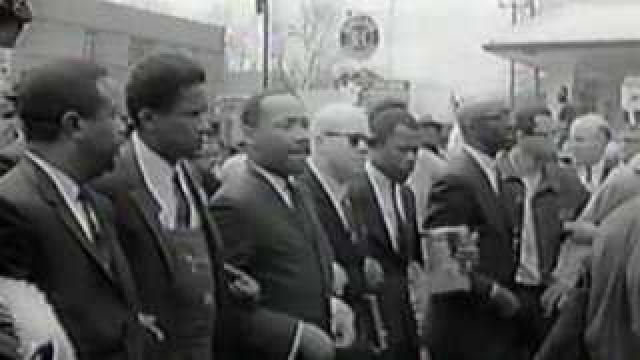 Council Proposing To Rename Old World Third Street To MLK Drive Extending Martin Luther King Jr. Would correct an 'injustice.' By Jeramey Jannene - Jan 22nd, 2021 03:04 pm. For nine months, Houck drove Martin Luther King Jr. Around Atlanta, though King liked to drive himself often, too. 'But he was a terrible driver,' Houck says. 'And he turned WAOK radio in Atlanta.

“You are done. There is only one way out for you. You better take it before your filthy, abnormal fraudulent self is bared to the nation.” That’s the shocking ending to the infamous letter civil rights hero Dr. Martin Luther King, Jr. received in 1964 essentially urging him to commit suicide. The letter and accompanying package containing blackmail were sent by the Federal Bureau of Investigation, as King quickly caught on. While the full, unredacted letter was finally published by the New York Times in 2014, the audio recordings of an extensive FBI wiretapping operation targeting King have been sealed until 2027. With just a few years left before they come to light, director Sam Pollard did a deep dive into the FBI’s surveillance of MLK under the leadership of J. Edgar Hoover in his documentary “MLK / FBI,” released by IFC Films earlier this month.

Pollard, whose films have garnered Peabody and Emmy Awards as well as an Academy Award nomination, joins Robert Scheer on this week’s installment of “Scheer Intelligence” to discuss this heinous chapter in U.S. history and what it says about America both then and now. Talking about an FBI informant that infiltrated the Southern Christian Leadership Conference (SCLC), for which MLK served as president, the award-winning film director comes to a harrowing conclusion.

“I know that the notion of informants in [organizations like SCLC] is probably still happening today in the Black Lives Matter movement,” says Pollard. “The FBI has not all of a sudden become clean and upright and upstanding. They still do those kind of shenanigans in any kind of movement that they feel is radical, be it Black movements or white supremacist movements. They still have informants, they're still monitoring, surveilling these organizations.”

Scheer, who knew MLK in his capacity as a journalist during the civil rights movement, as well as interviewed members of the FBI under Hoover, offers his perspective on the film and the sinister motivations behind FBI surveillance. The “Scheer Intelligence” host argues that one of the drivers behind this operation was likely MLK’s anti-war stance during the Vietnam War, a position that was partly inspired by a gut-wrenching photo essay of the effects of napalm on Vietnamese childrenpublished in Ramparts Magazine while Scheer was its managing editor. The connection earned the journalist a place in King’s FBI files as one of the Civil Rights leader’s anti-Vietnam War associates that Hoover loathed.

Describing the film as a compelling must-see, Scheer also points to one of the most significant questions raised in “MLK / FBI.”

“How could the assassination of Martin Luther King have taken place,” the host asks the film director, “without the government knowing? Without the FBI knowing? They had him under 24/7 surveillance.”

“I asked myself the same question,” responds Pollard.

Listen to the full conversation between Pollard and Scheer as they discuss the implications of that question, as well as address the highly controversial summaries of the FBI’s MLK surveillance tapes discovered by King’s Pulitzer Prize-winning biographer, David J. Garrow in 2019. You can also read the full letter from the FBI below:

NPR’s sites use cookies, similar tracking and storage technologies, and information about the device you use to access our sites (together, “cookies”) to enhance your viewing, listening and user experience, personalize content, personalize messages from NPR’s sponsors, provide social media features, and analyze NPR’s traffic. This information is shared with social media, sponsorship, analytics, and other vendors or service providers. See details.

You may click on “Your Choices” below to learn about and use cookie management tools to limit use of cookies when you visit NPR’s sites. You can adjust your cookie choices in those tools at any time. If you click “Agree and Continue” below, you acknowledge that your cookie choices in those tools will be respected and that you otherwise agree to the use of cookies on NPR’s sites.